People often question the value of youth sports. They overlook the many benefits of participation in youth, high school, and college athletics. These benefits have been documented and include everything from lower drug use and higher grades to better health and long-term economic success.

This is a collection of posts from this site that deal with the Benefits of Youth Sports. 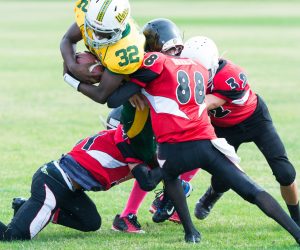 In a recently published article entitled Bidirectional Associations between Sport Involvement and Mental Health in Adolescence, researchers from the University of Wollongong, Australia found a direct connection between a child’s involvement in team sports and positive mental health. The entire study is worth reading (note: it is behind a paywall). This is one of their important conclusions:

However, there is consensus that sport can facilitate the development of psychological well-being (17). A recent systematic review found that participation in organized sport during childhood and adolescence is associated with higher levels of self-esteem, greater social skills, and fewer depressive symptoms (14). In addition, sport participation is associated with psychological health in childhood (5), and children who drop out of organized sport show fewer psychological strengths and greater psychological difficulties than those who maintain sport involvement (35). Moreover, noninvolvement in sport puts children at a 10%–20% increased risk of mental health problems (35). Importantly, the findings of both a systematic review by Eime et al. (14) and the original findings of Vella et al. (35) suggest that the psychosocial benefits of organized sport are independent of those that can be attributed to general physical activity.

This is more evidence that youth sports can have a powerful impact on kids. Continue reading

On October 14, 2015, Ernst and Young partnered with espnW and released a report titled, Where will you find your next leader? EY & espnW explore how sport advances women at every level. This great resource explores a variety of topics. Some of the report’s conclusions include:

The report is a great resource. So is the E&Y page releasing it.

Sports are so good for girls! Here’s a dad stepping up and coaching the only all girls t-ball team in the league. And he’s doing it for all the right reasons!!

I had never considered that there could be a link between a parent’s level of education and a child’s participation in sports. I should have. It makes sense. Closing the Gap in Access to Summer Camp and Extracurricular Activities finds that there is a connection and that we need to figure out how to deal with it. And it’s not just sports. It’s summer camps, trips to the zoo, after-school extracurriculars, and other enrichment programs.

This graphic illustrates the problem in sports. There is a 50% increase in the participation of children 6 to 11 years old in sports if the parent has an advanced degree v. some amount of college education.

And the numbers are similar for clubs and various kinds of lessons. (Like piano lessons.)

In this 2009 paper, Beyond the Classroom: Using Title IX to Measure the Return to High School Sports, author Betsey Stevenson finds that increase participation by girls in high school sports leads to increases in girls going to college as well as increases in female participation in the workforce.

While I have personally lived this, I had never really thought about this, but it makes sense: kids being active in youth sports has an impact on parents.

This Purdue study found a positive impact for parents of youth athletes. Some benefits include social friendships, improved spousal communication, and more. This links to the press release from Purdue as I have not found the full article yet.

Women’s Sports Foundation did an initial report about the impact of sports in 2004. They updated it with a 142 page report, Her Life Depends on It II,  in December 2009. This reports is a review of existing research on the links between sports and physical activity and the health and well-being of American girls and women.

There is a TON of material in this report. In addition to outlining the general conclusions here, I will also look at the source data as much as possible and post it as well.

Here’s an article about the study.

The National Federation of State High School Associations put out a short eight page publication, The Case for High School Activities, on the overall benefits of high school activities. This is not limited to sports. This short document pulls research from a variety of places and highlights some key findings.

In yet another example of why we can not look at things in a vacuum, this study on Sports and Teen Pregnancy Study from The Women’s Sports Foundation looks at the impact of sports on teen pregnancy.

Here are their major conclusions:

From the report: “Our results strongly suggest that, for girls, sports may be used as a developmental strategy in programs intended to reduce teen pregnancy.”

“We contend that sports are a cultural resource that builds girls’ confidence, sense of physical empowerment, and social recognition within the school and community. Girls may be using the self-reliance and social status gained through athletic participation to resist social pressures to exchange sex for approval or popularity.”