Sunday night, March 5th was the 27th Annual Northern Virginia Football Hall of Fame Annual Awards Banquet. The event is a cornerstone of youth and high school sports in Fairfax County. Every year it is attended by players, parents, coaches and referees from every youth football program in Northern Virginia as well as many high schools.

Fairfax County leaders attend every year. This year, Rep. Gerry Connelly, Supervisors Herrity, Faust, and Smith, as well as school board members Ryan McElveen and Ilryong Moon all attended. Neighborhood and Community Services Director Chris Leonard and NCS Athletic Services Branch Manager along with Stephen McLaughlin and Harold Leff from the Athletic Council were also there.

But the real focus of the evening is the award recipients.

High school players of the year include: 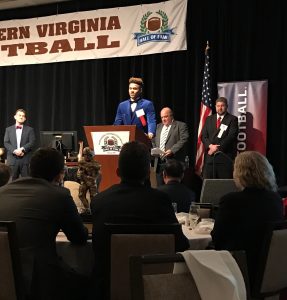 Youth football players of the year include:

High school coaches of the year include:

Coaches of the year for youth football include:

Football officials of the year include:

The stories for each of the award recipients were awesome.

It was a great event. Mark Meana did a great job as the Master of Ceremonies. New this year were videos about all of the award recipients. These videos were awesome and were done by the Fairfax High School Broadcast Journalism Team who conducted interviews and produced all of the videos.