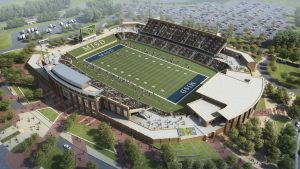 In August 2012 Eagle Stadium in Allen, Texas, opened. The $60 million stadium had seating for 18,000, a massive scoreboard with 38 foot wide high def screen, practice areas for golf and wrestling and opened with lots of fanfare. While stadiums open every year, this one was different. Why? Because if was a high school stadium.

On top of this, the stadium had to be shutdown less than 18 months later because of “extensive cracking.” The story of the stadium was covered by many media outlets including the Washington Post. It reopened in 2015 with Chik-fil-a, upper-deck seating, and more.

I remember reading about this at the time. $60 million for a high school stadium? At the time it seemed completely out of control. Now? It still seems completely out of control. But when I looked back to see what happened with Eagle Stadium, I found out that a $60 million high school stadium was just the start. This past September, a school district just down the road from Allen broke ground on a $70 million stadium.